If I were guessing, I’d say I’m the only person on the planet who spent a good part of one day this week whittling big chunks of sacrificial meat. Elijah! Clash of the Prophets opens this Saturday, so we are in that final week…the dreaded technical rehearsals. It’s the week that all the last-minute things have to be done. Details that have been put off until now. I’ve had this sticky-note that says “whittle meat” on the bottom of my computer screen for weeks.

I’ve had occasion to whittle some unusual things before. A roasted pig (Mystery of the Hebrew Scribe) remains my favorite. I keep him in my office. Yeah…his name is Babe.

That 7-foot tall pagan goddess, Styro, (used in both The Antioch Challenge and Barnabas) runs a close second. Living up in the attic now, she wears a cool set of wings I made for the Archangel Gabriel (Elizabeth and Mary) which comes in third place.

But I really didn’t know where to start on whittling, much less painting, big chunks of meat. What does sacrificial meat even look like anyway? Do they leave the legs and head on? I didn’t know, so of course  I “googled it” because that’s what we do now. Got some pretty graphic pictures of sacrificial meat. Seems that Muslims still do that as a tribute to Abraham’s willingness to sacrifice his son. Except, of course, they believe that it was Ishmael instead of Isaac whom he placed on the altar. Therefore, we are where we are in the world thousands of years later. 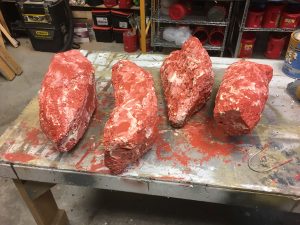 But back to my sacrificial meat…as it turned out, it looked pretty authentic back in the shop, don’t you think?

Theater production is a lot about illusion. We have a lot of that in this play. Magic tricks, fire, smoke and mirrors. This play is about how God dealt with a bunch of illusionists. Charlatans who created a religion that was marketed to the people of Israel as the cure for all their woes. Worship of Ba’al was supposed to guarantee fertility of both the womb and the fields. Followers willingly traded their treasure for blessings of health and prosperity.

The dynamic and amazingly successful marketers of the religion, the Prophets of Ba’al, inspired and animated by the enemy of God and man, had turned virtually every man and woman in Israel…God’s chosen people…away from the God of Abraham, Isaac, and Jacob, and away from the Law. They had even managed to deceive and convert the king of Israel, through the influence of his evil wife, Jezebel. The people of Israel stood by as the king and his queen murdered every true prophet of God they could find.

Only Elijah remained. And through him, in this story right out of chapters 17, 18, and 19 of I Kings, God deals with them. He exposes them for the phonies they really are. They have presented something that looks great, sounds great…but it isn’t real.

An illusion. Like my styrofoam sacrificial meat. It looks a lot like real meat, but you sure don’t want to swallow it.

Elijah starts Saturday, and this is one we sure hope you can make it to. We’ll be watching for you!

What A Day Of Rejoicing That Will Be!