We are almost finished with the set for Elijah. The subtitle of this play is Clash of the Prophets, and it will definitely be a clash. I really enjoyed writing this one, and it’s been fun talking with Glenn and the gang, about how to put it on the stage. I love the collective effort that goes into putting together every production. After spending months, and sometimes years thinking about a play, which was the case for Elijah, and then spending weeks alone writing, it’s a wonderful and humbling thing to see everyone get excited about bringing the story to life. Everyone becoming invested in making sure that every detail is right.

I’ve talked about it many times before, but there is no part of the amazing things which happen at Ragtown that astounds me more than the way the Lord gathers people and weaves their hearts and abilities together to bring these stories to the stage. Hours are invested in in the tiniest details that may be part of just one brief moment in a scene.

I’ll give you an example. Elijah is built around the story of his confrontation with the prophets of Ba’al on Mount Carmel. Everyone knows the story, so of course, there had to be the scene in which the fire from heaven burns Elijah’s sacrifice. When I was writing  that scene, I  thought that when that occurs, it should be sort of a jarring experience. It seemed natural that a few rocks would tumble down the mountain. So at that point in the script, I simply wrote: Rocks tumble down the mountain.

The set-building crew always love giving me grief about how easy it is for me to write a few words like that, which they then have to figure out how to make happen. In this particular case, Glenn, Ronald Thuett, and Keith Glaze spent the better part of a day figuring out and building mechanisms that could be triggered at the same time from one location, that would drop rocks from above, onto slopes of the mountains on the sets, and have them all tumble down in just the right places. 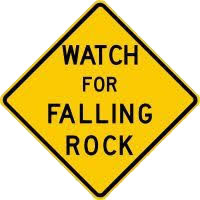 There was lots of testing, and dodging of rocks as the three of them worked up up in the rafters to make that one element of that one scene work the way it would need to, in order to create just that little extra touch of excitement. There’s going to be a lot happening in that moment, so you might not even notice the rocks, but they will come tumbling down the mountain, doing their part to make the experience of Elijah’s sacrifice being consumed by heavenly fire a truly memorable experience.

The show begins on February 23rd. It’s really one of the most interesting stories in the Bible, parts of which are truly humorous when you read the account in the 18th chapter of 1 Kings. Our hope is that this play presents the underlying humanity of Elijah…his utter faith in God, in the face of overwhelming odds. It will be a light-hearted, thoroughly entertaining production that I know you are going to enjoy.

But when you come…just remember watch for falling rocks.

What a Day of Rejoicing That Will Be!