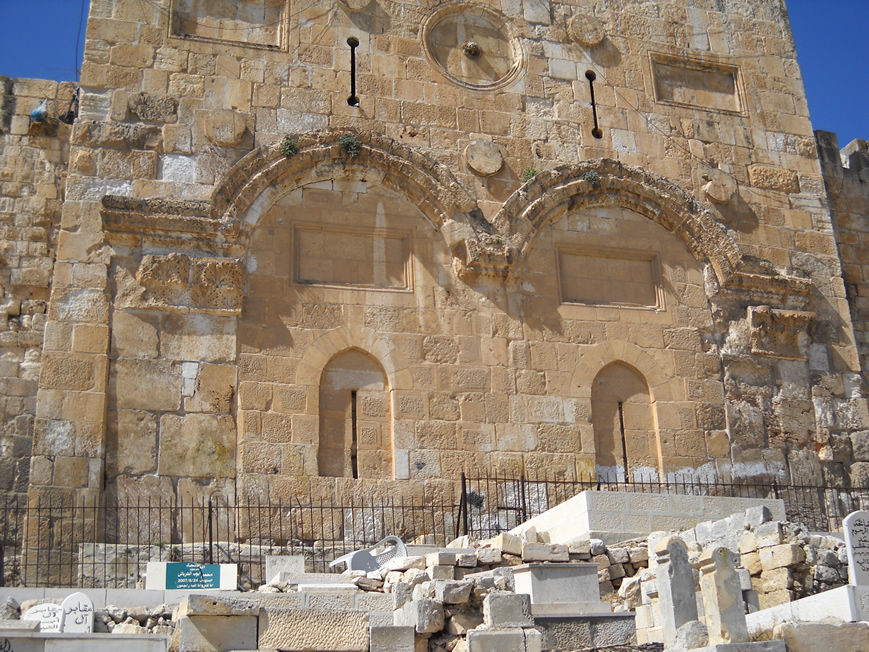 The design directive for the auditorium was a 360 degree set that looks like a street in Jerusalem during the time of Christ. The research involved studying photographs and DVD’s of present day Jerusalem and archeological sites, artist’s renderings of what ancient Jerusalem might have looked like, and models of the ancient buildings and temples. I took creative license in designing our Jerusalem street in terms of color, balance, scale and texture.

Specific references for the design were the Church of the Holy Sepulchre, the Via Dolorosa, Church of the Nativity in Bethlehem, the fabulous cliff palaces at Petra in Jordan, Herod’s temple, the Wailing Wall, St Catherine’s Church in Bethlehem, David’s tower at the Citadel, and the gated walls surrounding old Jerusalem.

Every surface in the theater has been sculpted in some fashion, then multiple layers of paint, using a variety of techniques were applied to complete the look of authentic ancient brick, stone and mortar.

Murals have been painted to depict the Mount of Olives and Jerusalem as they might have looked when Christ walked there, and the tower of David, which is still standing today. A frieze of seven magnificent angels look out over the audience from third story stone arched windows. Seven sculpted dove descend through the gate opening high above the stage.

In ancient Jerusalem, it was not common to depict animals or humans in decoration as it was considered to be idol worship. Rather, the use of geometric or floral designs was common, the exception being the use of the dove which was accepted symbol of holiness and purity. Another exception is represented in a mosaic, replicated from an actual fifth century mosaic discovered near Capernaum, created to commemorate the miracle of the loaves and fishes on the Lake of Galilee. 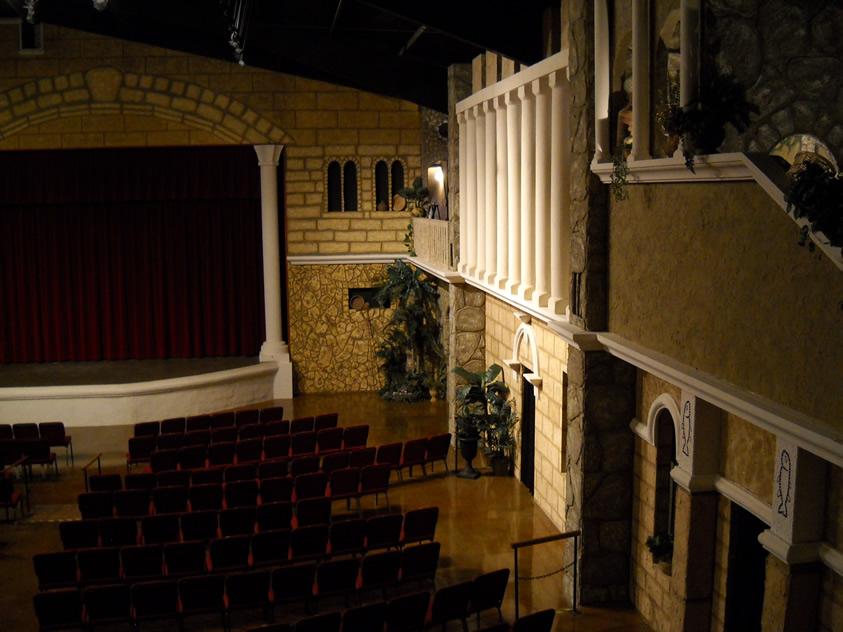 The sidewalls were designed first, the inspiration being modern Jerusalem streets with varied window shapes and sizes. The symmetrical windows give a sense of balance, while the assymetrical lend interest to the facades. The impression had to be a continuous street, yet avoid a sense of confinement. . Consequently, the walls themselves are not one continuous line, but broken in places contrary to what one might see on a narrow Jerusalem street today. The use of several colors was also intended to create an illusion of separate structures, subtly different in hue, but similar in tone.

The Church of the Holy Sepulchre was a major influence in the design of the walls. The structure is one of the most important shrines in Christendom today. The structure was purportedly built in 326 A.D over the site of the crucifixion and burial of Jesus. Today, six denominations (Greek Orthodox, Armenian, Catholic, Coptics, Ethiopians and Syrians) hold the building, and cooperation for upkeep and restoration is rare. The

ancient structure is a fascinating combination of windows of varied shapes and sizes, massive doors and staircases, angular lines along the rooftops, domes and columns. One very specific feature of the Church of the Holy Sepulchre is represented in the theater above the entrance doors. It is a high vaulted niche framing a stylized cross inset with stained glass.

An adjacent rooftop garden includes a date palm tree, common in Israel, but ours is crafted entirely of Styrofoam and silk. This interesting feature was the result of discovering that a massive steel column was visible after the final construction was completed. It seemed the perfect spot for our hermareous raeus palm tree…tall, stately and serenely keeping watch over the proceedings below.

In designing the back wall of the theater, I was intrigued by the idea of what Pontius Pilate’s residence in Jerusalem might have looked like. With Roman architectural influence a certainty, I imagined massive marble stones, ornate columns and grand pediments. It has been said that Pilate sentenced Jesus at the praetorium on an outdoor bema or podium above a large paved square where large numbers of people could gather to hear him. Pilate’s residence had to accommodate the technical needs of the theater, and the fact that sound engineering and lighting areas required the openness of a portico leant itself to that requirement. 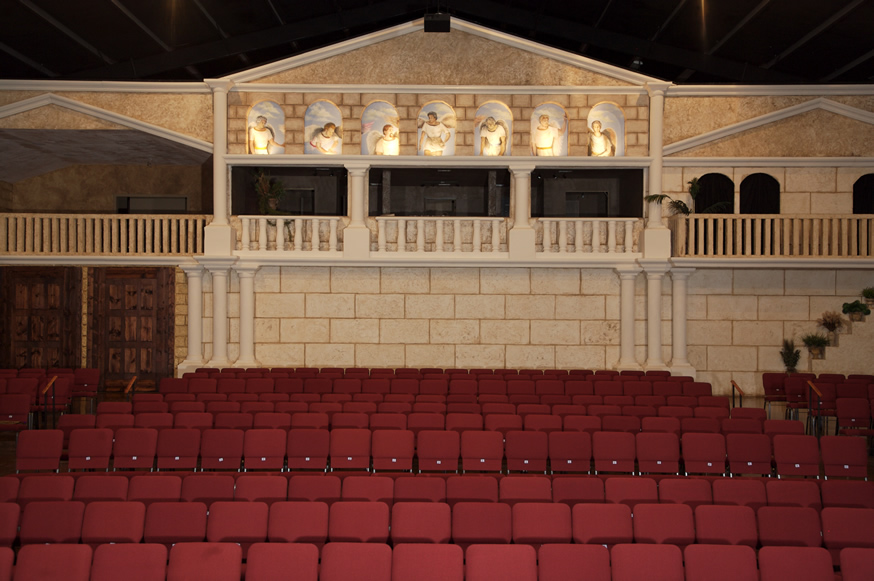 The idea of contrasts is so interesting…rough hewn stones vs. the massive stones chiseled out of marble, the ornateness of some structures vs. the simplicity of others. We can be fairly certain that the Roman authority of the time would have lived in a magnificent structure and it does seem odd that there are no historical documents to support the architecture of it. The contrast between what Pilate’s house must have looked like sitting among the simple stone houses of the residents of Jerusalem must have been a marvel to see.

The final wall to be designed was the stage wall or proscenium . It had to be stunning, yet subtle, to avoid competing with the stage set or the actors upon it. I sat at the drafting table with creative bloc, pored back over all the photographs and resource books and went to Jerusalem again. The ancient city is surrounded by a massive wall, built in King David’s time for the defense of the city. The wall stands today over 50′ high with several gates interspersed for entry and exit out of the city: Stephen’s Gate, the site of the stoning of Stephen, also known as the Lion’s Gate for its’ carved lions which flank it on either side; the southern Dung Gate which permitted the disposal of the city’s refuse and original to King David’s time; the Damascus Gate, in the northwest part of the city, considered the most striking; the Zion gate on the southwest still exhibits bullet holes from the Six Day’s War in 1967. Probably the most significant gate, the Eastern Gate, also known as the Gate of Mercy or the Golden Gate (so named for it’s golden hue) faces the east and looks out over the Mount of Olives. This gate is the site of Jesus’ triumphal entry into Jerusalem at the Passover Feast and the only gate that leads directly to the Temple (See Ezekial 44:1-3). The gate stands today, however unlike the other gates, sealed permanently. 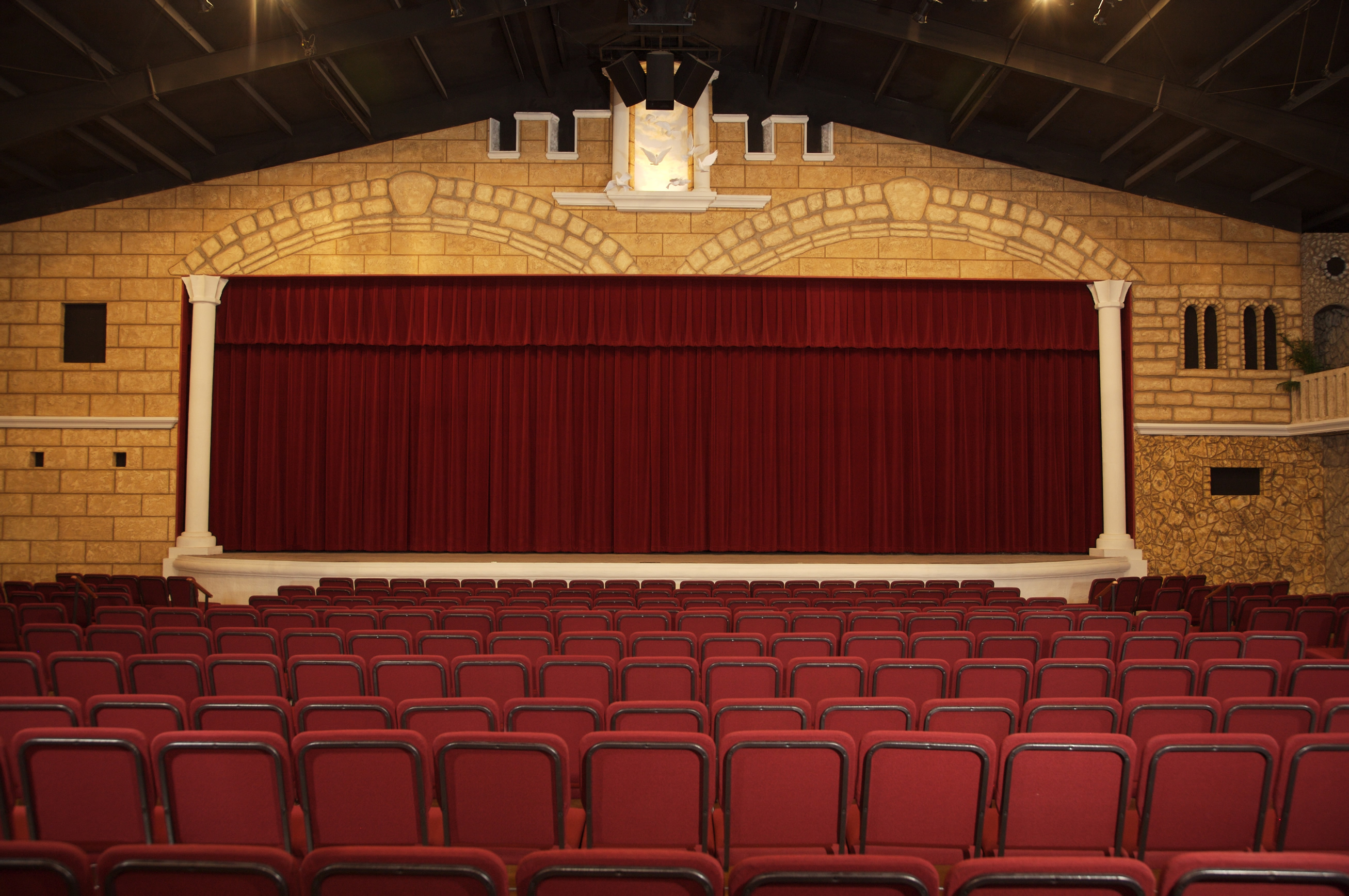 In 1530 A.D., the ruling Turkish governor of Jerusalem had the gate walled up because he had been told the Jewish Messiah would return through this gate to judge the people. He hoped to avoid this judgement and ordered the gate sealed in order to keep the Messiah out . Here was my inspiration for the proscenium, and how fitting that the stage opening is symbolic of the gate that describes Jesus in the Bible… I am the door; if anyone enters through Me; he shall be saved, and shall go in and out; and find pasture. John 10:9 NAS

The open trumpet cage at the top of the proscenium was inspired by two different sites. The Damascus gate includes an opening far above the actual gate where a trumpeter would sit and announce the beginning and ending of the Sabbath. I had also studied the beautifully stunning photographs of the cliff palaces in Petra, called the Rose City and wanted to incorporate and combine these two architectural elements. It was my husband’s inspiration to include the seven beautifully sculptured dove as they descend through the trumpet cage into the auditorium, the Christian symbol of the Holy Spirit.

In planning the design of the upper passages, my thought was to incorporate Herod’s temple into the design. Massive stones of the temple were said to have been great cylinders rolled into place and then chiseled flat. Only the stones of the Wailing Wall remain intact, its’ stones measuring up to 3′ x 5′ x 30′. Very little remains of Herod’s temple, but descriptions from the Bible are so detailed that historians have been able to recreate it in model form which in 1/4 = 1′ scale required an area of 1/4 of an acre to replicate. Imagine the size and proportion of such a structure, with its’ porticoes, columns, courtyards, tunnels, arches and huge stairways.

It was here that Peter was arrested for preaching publicly, as was Paul at a later time. It was here that the disciples spent time together, and here that Pentecost occurred. Herod the Great began building the magnificent temple in 20 B.C. Herod Agrippa II saw the temple completed in 64 A. D. and the Roman Tenth Legion destroyed the complex in August, 70 A. D. in order to break the spirit of the Jewish rebels. 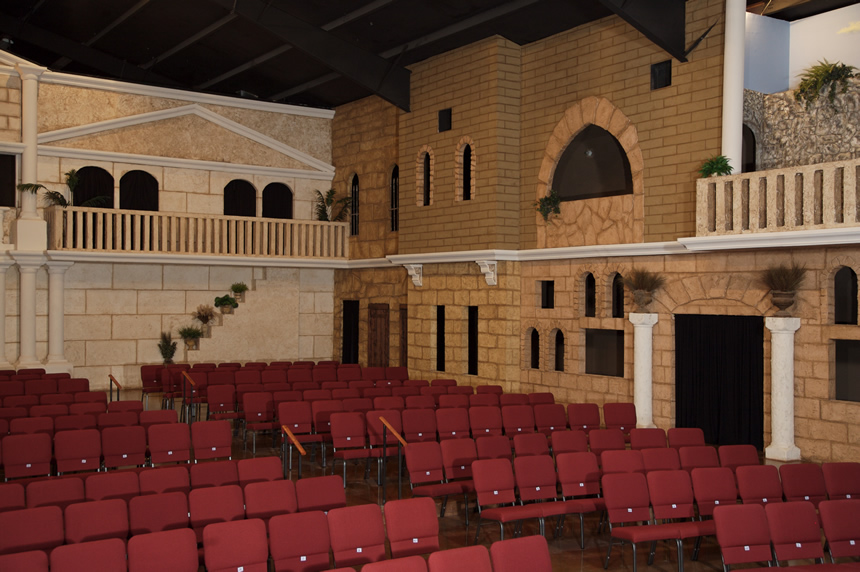 The importance of these structures cannot be dismissed by the historian, nor the Christian. Our faith’s beginnings took root among those stone fragments which exist in and around Jerusalem, in and upon that very ground where Jesus once walked. Our Jerusalem could not be a replica of that holy place, but our goal is that this representation of the architectural forms, textures and styles will give our guests a sense of stepping through time.

Finally, I must make a personal comment on the actual building of Ragtown Gospel Theater. There are countless hands who have left their heart prints on this building. The individual commitment to this project has been inspirational and so appreciated. Each member of the crew has exhibited great skill and talent in their individual jobs and have taught us, the laymen, with great patience, some humor and a lot of faith. Along the way, they earned our respect and we love them now as dear friends. They made two dimensional drawings burst into a three dimensional marvel. There are too many names to list and so, I will simply say, thank you Bill

This project has truly been blessed. There was a little bloodshed, a lot of sweat, and some tears. None of us will ever be the same who have had the privilege and blessing to work here. Thank you to my family who have been a source of faith and inspiration every single day since we first began. I could not have done this work alone…and I did not.