The Psalmist is over, and we all so hated to see it end. Chris Smith, Michael Williams, David Brantley, David Burk, and Nathan Graves were the principal players, and they each did an absolutely stellar job. If you missed it, you missed one of our most meaningful and beautiful productions yet.

The Psalmist marked the beginning of a new direction for Ragtown in another way.

Because of a surgical procedure on his back that would mean some months of rehab for Glenn, we knew it was prudent for him not to be in The Psalmist.  He reluctantly agreed that it made good sense for him to sit this one out in his director’s chair. It’s the first of our 38 productions in which he did not have an acting role. Since he wasn’t busy getting in costume and makeup and preparing himself to perform, it was also the first time that he has joined the rest of us to enjoy the wonderful fellowship with our guests before the show begins. I have a feeling he’s going to have to change his routine from now on.

That’s not all that’s going to change.

With Glenn not being in the play, I thought it would be a good time to try something new. I asked him and Jay Young, and Chris Smith to sing with me on just one song. I didn’t want to overwhelm them with having to learn several tunes. Plus, I wasn’t sure what Glenn’s stamina would be like. His surgery was a big one, and it’s taken time for him to get his strength back. As it turned out, it’s been so much fun, that he, Jay, and Chris are anxious to see what else we might can do, and are excited about performing in the next show.  You’ve probably seen our little video clips. I’m hearing a whole lot of, “Hey and we could do…”  from all three of them. We had an absolute blast singing together.

However, the quartet, for the moment is remaining nameless, since the guys rejected my idea for a name…Chip and the Monks. 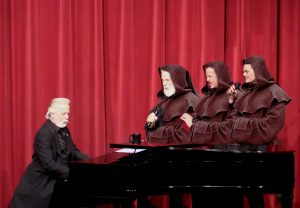 I told them they didn’t have to wear the costumes, which were apparently quite warm. I tried to convince them that it’s still kind of an ideal name, since Monks were truly the original Christian men’s singing groups, right? But they’re still not having it.

So, trying to be flexible, I suggested another name, which the audience on hand really seemed to like…the Chip ‘n Dales. They wouldn’t even put on the bowties.

So we’re having a few growing pains as a group, but by Christmas, we should have it all worked out, and have a few more songs ready to go.

In addition to the guys…I’ve had the most amazing women on stage with me during The Psalmist. My daughter, Jency Anciso, Sarah Smith, and Savannah Clement each sang with me, and we’re looking forward to some very special Christmas concerts with those extraordinarily gifted ladies during our next production.

And speaking of the next production…it’s Bethlehem! Goodness, I love that play. And  if the comments we’ve heard since we last staged it in 2015 are any indicator, many people do. I love our other Christmas musicals, but Bethlehem is special. To be able to see the impending birth of Jesus from God’s perspective is eye opening.

If you’ve never seen Bethlehem,I hope you’ll start talking to your Sunday School class, or your home group, or family, and begin making your plans to come early in the production, before all the Christmas activities begin. I’m so excited about both the play and the special Christmas concert we’ll be presenting with these very special guests. Music, fun, laughter, and a beautiful message you will carry away in your heart…that’s our hope for every Ragtown production.

Be watching for special Back Stage Pass videos coming your way as we build both Heaven and Earth  on the stage for Bethlehem. Go to our Facebook page, check in, and leave us review or comment. We still have parts to be cast in this show, so if you’d like to be part of our acting company, send your information to glenn@ragtown.com.

Keeps Me Singing As I Go,