Pickle and the Rainmaker

Oh my goodness! The response we’ve had to the first three performances of the musical, Ragtown! has been overwhelming. The cast my brother put together for this full scale, two act production…well I just don’t have the words for how grateful I am for their outstanding work to bring this story to life after two decades of waiting to see it on the stage. I knew the music would knock people’s socks off. My collaborator and friend, Andy Patterson, did a superb job on the orchestral arrangements, and assembled such great talent to record the soundtrack. Our actors, singers and dancers bring such delight and heart to it. I can’t wait for you to hear it. But I’ll have to share more of that story in a later post. I so hope you’ll come and see for yourself.

However, there is a very special part of this production that no one will ever see, and I wanted you to know the story. The original plan was to produce Ragtown! in an outdoor amphitheater with the Caprock canyon wall east of the Gospel Theater as its backdrop. We envisioned an opening historical tableau of a Comanche war party streaking along the rim of the Cap, followed by cowboys herding Longhorns along the edge, and then a family traveling in a covered wagon that would eventually end up pulling onto the stage to begin the show.

To that end, we acquired a small herd of Longhorn breeding stock, complete with the infamous bull, Jorge. We also went about building a small remuda of horses, and set about herding the Longhorns, with the profoundly mistaken notion that those wily and headstrong beasts were capable of being trained to follow the path of our choosing.

There are more stories about our cowboy misadventures than we have room here to print. One involves the surprising revelation that Texas Longhorns have the ability to climb straight up a vertical canyon wall, and a good horse is perfectly willing to follow. For the sake of the real cowboys riding alongside us, Glenn, being the actor brother, managed to pretend it was something he’d done all his life. As for me, before we reached the top of the canyon wall, I was eye-to-eye with my horse. I won by a nose when he finally leapt up over the rim and tore out after the fleeing cattle, with me trying to climb back down his neck and get my boots back in the stirrups. At least that’s the way I remember it. 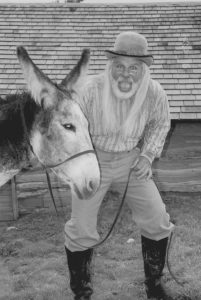 Thinking like a casting director, back in 2003, Glenn began searching for just the right-looking donkey, and when he found her, there was no doubt. She had the longest ears of any donkey he’d ever seen, and was chock-full of character. He set about training her to lead, and to come to him when he whistled. It wasn’t easy. The stubbornness of donkeys is the stuff of legend, and Pickle lived up to the reputation. But Pickle and Glenn became attached over time, and eventually, she even allowed him to saddle and ride her, a notable feat documented on a TV spot we taped to promote Post tourism. Of course, she tossed him off when she’d had enough of being a TV star. She had a reputation to protect.

As time passed, and building the amphitheater in the foreseeable future seemed less and less likely, we got rid of the cattle and most of the horses, but Glenn continued to dote on Pickle. So when she developed Founder, an excruciatingly painful and incurable hoof condition that resulted in the recommendation that Pickle should be put down, it was heartbreaking for him. He chose to do it himself, and by himself, he buried her in the field near the three crosses you see south of our entrance road.

When we made the decision to re-write the musical, paring it down for indoor production, there was no way to leave Pickle out. We talked about a few options, but in the end, decided that since the Rainmaker is sort of a mysterious fellow that some have speculated might even be an angel, then his companion, Pickle, could be invisible to the audience, but not to the Rainmaker.