No Greater Love Than This

There is a moment in Bethlehem that everyone who has seen the musical will remember. It’s my favorite part. There’s a special reason for that.

MARY
Joseph! She cries out as another birth pain comes.

As the song begins, angels gather around the

Father to cover the view into the stable.

[The music builds and builds to a sudden stop, and after just

Behold the voice of God! My Son!

The angels move to allow the audience to see into

Mary…he is beautiful. He is wonderful. He is perfect.

Joseph raises the baby, wrapped in the swaddling cloth

I have often said that the plays I write are just a pile of paper until my brother and his cast bring life to those pages. Just reading the words above, you wouldn’t necessarily imagine how beautiful, and how moving that scene is. You wouldn’t see how the angels, depicted in all ages, shapes, and sizes rush to surround the stable in joyful excitement. You wouldn’t think that at one precise moment, virtually the entire audience would smile as one, usually with a softly uttered, “Ohhh.”

When I was working on this play,  Jordan and Cassie, our son and his wife, were expecting their first baby. Jordan’s humility and honesty about his trepidation helped me find the words of Joseph’s prayer and his song,  A Mystery.  As I watched Jordan come to grips with the impending reality of being a father, I imagined how much greater that anxiety would have to be for a young man who had been told that the child was actually the Son of God.

I was still working on the music for the ending scene when that first grandchild, Nixon Scott Polk was born the day before Thanksgiving. Three days later, Nixon got his first part in a play when his Daddy helped me record the most perfect moment of our new musical, Bethlehem. It still gets Nixon’s DaddyPop and Birdie every time…along with everyone else in the audience. Nixon will turn eight this year, and this is the fourth time his voice has been the first utterance of the infant Jesus.

Last year, going back and finding photographs from the day he was born, Nixon portrayed Jesus yet again, but in a different way. He and his dad were the models for Joseph and Jesus for the cover of my Christmas CD, Hands of a Carpenter. 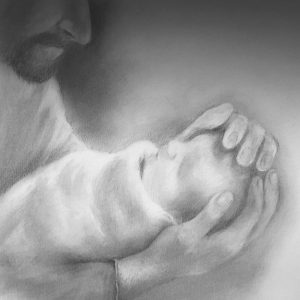 I’ve always thought that it was especially amazing that I found myself writing this particular story at exactly that time. As I attempted to envision Joseph’s state of mind, the Lord provided a wonderful example in someone precious to me, whose heart I knew so well.

He guides and inspires everyone involved in the Ragtown productions in so many special and unexpected ways, as we set about portraying the iconic figures of the Bible with a dimension of authenticity. From the page to the stage, every nuance of those characterizations is examined, weighed against Scripture, and presented with the sincere hope that we are presenting a faithful aspect of what is almost always a very complex truth.

Earlier today, Glenn and I had occasion to discuss our depiction of God the Father in Bethlehem. We set out to depict God as the Creator, certainly, but also as a father to a precious only son. In that relationship between God the Father and Jesus, we see, in my view, compelling evidence that we were indeed created in God’s image…with the capacity to love. Rather than say it is a depiction of the humanity of God, perhaps it is more accurate to say that in this relationship, we get a glimpse of God’s image imprinted upon humanity.

Eight years ago, as we talked about this portrayal of God and Jesus as a father and his son, I remember telling Glenn that I wrote it with the thought of a father having to say goodbye to a son who is going off to war, but knowing without a doubt, that his son was destined to be captured, cruelly tortured, and brutally executed on public display.

There is a tenderness in that scene that some might interpret as depicting God as weak, but I disagree. I believe it conveys that God is real. His love is real. The cost of giving His only begotten Son was real, and beyond our imagining. But that He did it—knowing that the Father, the Son, and the Holy Spirit willingly endured that for no other reason than love for us, is a testimony to the height, depth, and the breadth of that love.

Another evidence of God’s image being imprinted upon humanity is something we celebrated this past Monday. Men and women of the armed services who were and are willing to exhibit what God says in John 15:13: Greater love has no one than this, that one lay down his life for his friends.

Were it not for the willingness of our American veterans to do exactly that, it is a certainty that we would not today have the freedom to proclaim the Gospel through music and drama as we are privileged to do. Because of that, we have made a decision that is long overdue. As a small token of our gratitude for their service…for their willingness to defend and protect our liberty to freely worship and proclaim the message of Jesus Christ as Savior and Lord,  all veterans of the United States armed services, as well as those currently serving, will be our honored guests anytime they attend a Ragtown Gospel Theater performance.

Bethlehem is the untold story of Christmas…the story behind the story of the birth of Jesus, and it seems to have captivated thousands of people who have seen it since that first production in 2010. Many have returned with family and friends each year. This is the fourth time we have staged this musical, and looking at last weekend’s audience and reservations for the upcoming weekend, Bethlehem is drawing the largest crowds ever for this early in the season. I want to encourage you to make your reservations as soon as you can, so you can get the very best seats available for your family or group. It is a beautiful way to begin a season of thanksgiving and joyful celebration.