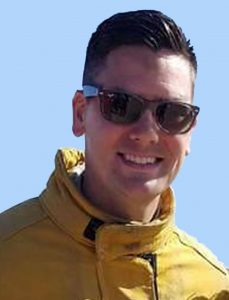 What does Chris Smith, firefighter and father of three boys, do in his free time, when he’s not responding to emergency calls with his unit of the Midland Fire Department? On weekends through the end of August, he can be seen portraying the Holy Spirit on stage at Ragtown Gospel Theater in Post.

Chris is an integral part of the company of actors and singers who are now in their twelfth season of staging Bible-based productions at Ragtown. Not only because he is a remarkably gifted actor, but his pure tenor voice made Chris the perfect choice for the role of the Holy Spirit in this play, according to director, Glenn Polk.

“But it wasn’t just his voice, nor his acting that made Chris the best choice,” Polk says. “This is the first time we’ve depicted the Holy Spirit as a visible character in a play. It isn’t a role just anyone can do. Chris has such a transparent heart for God, which he brings to every role he performs. That heart was essential, if he was to be believable as the third person of the Trinity. He does that beautifully.”

Many area church travel groups regularly attend productions at Ragtown Gospel Theater and are already familiar with Chris. He was the wounded and incorrigible headmaster Cornelius Houchen in Ragtown’s Christmas musical, Say Nicklaus! He has portrayed Jesus in the musical, Bethlehem, a role he will reprise during the upcoming Christmas season. Chris was also a young Jesus in The Carpenter’s Son. In that play, he was paired with Michael Williams, who portrayed James, the younger brother of Jesus.

The two once again share the lead roles in Ragtown’s current production, The Psalmist. Michael plays King David, caught up in his intrigue with Bathsheba, the wife of one of his trusted warriors, which leads to the great failing of his life. As the Holy Spirit, Chris attempts to reach David’s heart, but the willful choices the king makes seal his fate.

Few of the theater’s productions depict Old Testament characters. Chip Polk, who writes the plays produced at Ragtown, typically chooses to present the New Testament Gospel message. His stories often present Jesus as seen through the eyes of those who were closest to him during His ministry on earth.

Polk explains the significance of the departure to an Old Testament story conveyed in The Psalmist. “We always hear David described as a man after God’s own heart. If any mortal man was able to withstand the temptations of the world, the flesh, and the devil, it would have been David. His love for God, and his utter devotion are evident in the words of the Psalms he wrote. But when put to the test, he was as easily drawn into sin as Adam had been. And every other man and woman since. David proved, once and for all, that man was not capable of resisting sin on his own. Our only hope was a Savior who would take away the sins of the world and reconcile man to God. Our only hope was…and is Jesus.”

Aside from the beautiful message of The Psalmist, it is one of the most stunning sets Ragtown has ever created. The songs performed by Chris Smith, which punctuate the production, add a beautiful and memorable dimension as well.

Ragtown Gospel Theater’s production of The Psalmist will continue every weekend through August 26th. For information about times and dates, visit www.ragtown.com, or call the toll free Reservation Line, 1-877-RAGTOWN.

In the meantime, if you should be in Midland and happen to see a Midland Fire Department vehicle being dispatched, take confidence in knowing that the Holy Spirit may well be on board, determined to keep you safe and secure.