Mary, Mother of the Lord

I took a little stroll down memory lane this afternoon. I browsed through these blog posts that I’ve written over the past twelve years. The first one was published on May 8th, 2007. Ragtown had been open for two months. As I skimmed through one post after another, it became apparent that I can pretty much sum up all 100,000-plus words in the those 234 posts with two words: Please Come!

Just in case you haven’t heard yet, our summer production, which starts June 22nd, is Mary, Mother of the Lord, and I truly love this play. 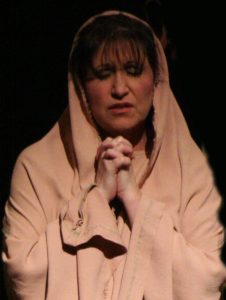 I always feel a little wrong when I talk about loving one of my own plays, but I do love this play. I love that it depicts Mary with reverence, not as an icon, but as a real mother, which she was. I started writing this play in the last months of 2007, and the longer I worked on it, the more amazing this woman became to me. At the church I grew up in, if Mary was ever discussed, it was at Christmas of course, then as a footnote to the miracle of Jesus changing the water into wine, and acknowledging her presence when Jesus was crucified. Who she was, her astonishing, steadfast faith, her character and strength to endure…the very reasons, I think, that God specifically chose this remarkable woman to be the earthly mother of His Son, were never talked about much that I remember.

My commitment is to never write outside the lines of Scripture, but more often than not, the stories we tell fall between those lines. Mary, Mother of the Lord is one of those stories. This play takes place after the Crucifixion, the Resurrection, and the Ascension…but before Pentecost.  Jesus had instructed the remaining eleven apostles to wait in Jerusalem until a miraculous promise was fulfilled. He described it as being clothed with power from on high, baptized in the Holy Spirit, and receiving One who would be their  Counselor, Advocate, Helper, and Comforter. Well over a hundred people gathered and awaited with the apostles, praying, wondering, and believing together.

Imagine what it would have been like, to have been among them.

Mary was there. The things that must have been going through her mind and her heart, after having watched her Son publicly tortured and brutally killed, and then to see Him whole and alive once more, only to watch Him depart from her again as he ascended into Heaven from a hill outside Bethany. She was His mother. She had been utterly, selflessly devoted to Jesus from the moment of His conception. Her faith in Him never failed. But as days of waiting became seven long weeks, her longing for her Son had to have tested even Mary’s tenacious faith. It is a beautiful, touching story with a very happy ending.

We have a wonderful cast in this play, and the most wonderful among them is the gifted woman in the title role. Laura Bryan brings Mary to life on the stage. Her strength, her vulnerability, her heartache, and her joy will resonate with every Christian deeply, and unforgettably. A delightful Ragtown newcomer, Linda Murphy, joins Michael Williams, Christy Morris, and director Glenn Polk to provide a tapestry of interesting personal relationships they each have with the Mother of Jesus.

All that to say…Please Come!