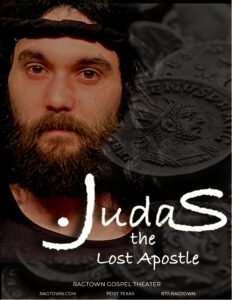 Last Saturday, we opened Judas the Lost Apostle at Ragtown Gospel Theater. It had been twelve years since I’d seen this play, so my memory of writing it had faded. Robin and I didn’t attend even one rehearsal, which has never happened before. So we were watching it with fresh eyes and hearts, right along with everyone else in the audience…all 36 of them. More on that later.

One of our volunteers asked me if I heard the audience’s reaction when the curtain opened. I was a moment late getting into the auditorium, so I’d missed it. She said it was like a collective gasp. I loved that, because we worked hard on this set, just hoping to come close to matching the stark beauty of the first one, back in January, 2009. I think we did.

The first time we did the play, my brother, Glenn, played Judas. I also wondered if Michael Williams could come close to his riveting performance. Well, along with everyone in that audience, I was absolutely blown away. Moved to tears.

Michael hadn’t let his wife, Kristen, go to any of the rehearsals, hear him practicing his lines, or even read the play at home. He’d wanted her to experience it just like everyone else in the audience. Afterwards, it was the sweetest thing to see her arms around his neck, just sobbing into his shoulder, lifting her head to look at him, shaking her head in wonder and burying her face  in his shoulder again. She was so moved, and so proud of his remarkable depiction of the most enigmatic, most difficult to understand of all the apostles.

I heard a lady say as she was leaving, “I don’t think I even breathed for that whole play.”

It is a role that requires of the actor, two very distinct portrayals. The play takes place while Jesus is still alive, but on the cross. When Judas first appears, Satan has possessed him fully, and he uses Judas to gloat in arrogance before God about what he believes is his victory over Jesus. Later in the play, Satan discards Judas, and we see a completely different personality, revealing the shell of a man he has become.

Our hope is that every play we produce will convey some aspect or perspective on the Gospel in a way that people don’t normally hear or see, in the hope that the person and the promise of Jesus will be revealed in a fresh and compelling way. I agree with the lady’s comment…it is a breathtaking experience.

Michael isn’t the only outstanding actor on the stage in this show. Mikey Gonzales, who has been in several Ragtown productions, and always brings such authenticity and heart to his roles, plays Levi, the tax collector who has attempted to befriend Judas. Mikey’s challenges in doing this role have been beyond anyone’s ability to overcome, apart from absolute dependency on Christ. In the middle of rehearsals, Mikey lost his last surviving member of his immediate family, when his younger brother, Patrick, passed away.

His courage and determination to continue on in spite of such a heartbreaking loss has been inspirational beyond words. He believes, as all of us do, that these productions are so much more than entertainment. That they are worth the time and commitment. The Lord uses them to touch people in ways that perhaps nothing else can. Such a heart this young man has.

As I said earlier, we had an audience of 36 people last Saturday, and given the times we’re living in, we were so grateful for every one of them. But watching those profoundly committed young men on that stage, so utterly devoting the talents God has blessed them with, to making the very most of that opportunity to reach people with the Gospel of Jesus Christ, with absolutely no compensation for their great work, apart from the words of appreciation from the audience, and their assurance from within that they are doing what God would have them do—those 300 unoccupied seats never looked so empty.

I hope you’ll choose a Saturday in March or April to come and meet these extraordinary men, as they bring Judas Iscariot and his loyal friend, Levi, to life on the Ragtown stage in Judas the Lost Apostle. You will be so glad you did.